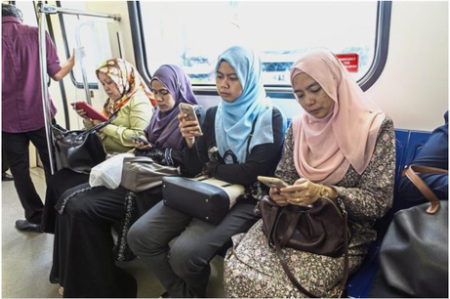 Get through the fasting month with a little help from these apps.

The fasting month of Ramadan has come around again, and while it’s a testing time for some, it is also an opportunity to change oneself for the better.

Here are four apps to ensure you don’t miss prayer times, Sahur or breaking fast, and even one that helps you form good habits.

One of the most popular apps for prayer times, Muslim Pro claims to have over 50 million users.

The app offers visual and audio notifications for prayer times, Qiblat direction finder, text and audio of Surahs from the Quran, and you can also engage other users of the app.

The app requires permission to access your location in order to provide accurate prayer schedules, as well as directions to nearby mosques and Halal restaurants.

Also, the Quran is available in several languages, including English, Malay and Mandarin.

Though free, there is an option to pay to remove advertisements and download the Quran for offline listening, as well as change the theme of the app.

For iOS users, there is also a paid alternative – Iman Pro – which claims to be the first to base its prayer times on local data from the Department of Islamic Development Malaysia (Jakim) e-Solat service.

It has many of the same features as Muslim Pro, including a Qiblat direction finder, and locations of mosques and Halal restaurants.

Both apps are also available on the Apple Watch.

Part of the reason why Muslims fast during Ramadan is to remind them of the sufferings of the less fortunate. They are ­encouraged to donate to charities and feed the hungry.

The United Nations’ Share The Meal app makes it easier than ever to help others by funding meals for Rohingya refugees and children in Yemen, Syria, Uganda and North-East Nigeria.

You get to pick which country you wish to donate to and the app also displays how close each ­country is to its campaign target.

There is also a social element where users can login with their Facebook account to find friends who are also using the service so they can band together to raise funds.

To encourage people to donate there are “achievements” – if you donate seven meals during Ramadan, you will get the special Golden Date achievement.

The app has over one million users and has collected funds for over 23 million meals so far.

Share The Meal is part of the World Food Programme which assists 80 million people in 80 countries each year.

In addition to fasting, Ramadan is a time to abstain from bad habits like smoking or picking up good ones like making time to read or floss.

The key to make it stick past Hari Raya is consistency. The Way Of Life app encourages users to stay on the wagon with reminders and also by logging their activities.

Reminders can be set up for weekdays, weekends or specific days of the week, and users can add a custom message and choose whether or not the reminder should also sound an alarm.

Unlike some tracking apps that focus only on daily check-ins, Way Of Life displays the user’s progress in the form of bar graphic or pie chart. This feature is not only fun but keeps you motivated so you don’t quit.

The app is free but it’ll cost you RM19.90 to upgrade to the Pro ­version, which will allow users to track any number of habits instead of just three, remove ads and allow the data to be backed up to Cloud services like Google Drive, Cloud Drive and Dropbox.

Waking up in time for sahur (pre-dawn meal) can take a toll on people who aren’t usually early ­risers, so it’s important to get a ­handle on your sleeping habits.

Sleep tracking apps like Azumio’s Sleep Time make it easier to keep tabs on whether users are getting their nightly downtime while also measuring the quality of their sleep by tracking their “movement” throughout the night.

To track their sleep, users just need to place their smartphone on the bed and turn on the app.

Based on this, Sleep Time creates an easy-to-read chart that will show the users’ sleep pattern.

Once the app analyses your sleep pattern, you can use its smart alarm which is claimed to wake you up when you are in your light sleep phase so you’ll feel refreshed rather than tired.

For those finding it hard to fall asleep, the app also has noise ­generators like gentle waves, rainforest storms, and ocean waves to help you nod off.