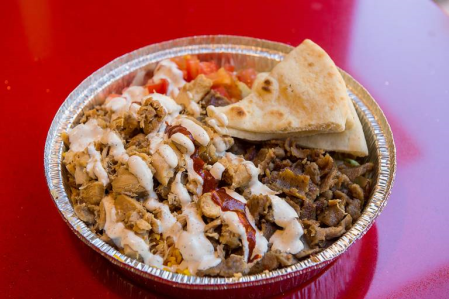 Stockton Boulevard is better known for pho than falafel, so it might be a surprise to find that a onetime Orange Freeze stand has reopened as the halal gyro joint Orange Oven (2790 Stockton Blvd., 916-533-7727). Ateeq Rahman, who grew up in the neighborhood and now attends nursing school at Sacramento State, opened the popular new spot in May, turning out gyro and chicken wraps, samosas, halal burgers, and, of course, fruit freezes.

Rahman’s stand – a mashup of old and new Sacramento, serving both Muslims who adhere to Islamic dietary guidelines and non-Muslims who may barely know what halal means – is a hallmark of the growing visibility and availability of halal food around the capital region.

If you love kebabs, gyros, shawarma and falafel, this is a great time to be a Sacramentan. A rich and diverse landscape of halal cuisine has blossomed from Natomas to Folsom, including not just traditional dishes of the Middle East but also American favorites prepared with halal meat. Halal guidelines, analogous to kosher practices in Judaism, dictate how animals can be butchered and how meat can be handled for Muslim eaters who follow them; they also, like kosher laws, prohibit pork.

That expansion might have been easy to miss if you don’t frequent the Fulton Avenue corridor of Arden Arcade, long a hotspot for Middle Eastern and Mediterranean restaurants – some halal, some not. But the burgeoning market for halal dining is making itself felt around the region, from downtown to Folsom, Natomas to Elk Grove – even in small-town Woodland, where mod, sleek House of Shah Afghan Urban Eats (538 Main St., Woodland, 530-665-6516) advertises all-halal fare like worth-the-drive spicy beef chapli kabob.

Newer restaurants branding themselves specifically as halal include Rancho Cordova’s popular Halal Fried Chicken (10899 Olson Dr., Rancho Cordova, 916-852-8533), which offers American-style fast-food favorites, and outposts of the booming chain The Halal Guys, which opened in Davis in the spring (500 1st St., Davis, 530-746-2283) and is projecting a fall opening in Sacramento’s Ice Blocks development.

The Halal Guys, which now has dozens of locations worldwide, touts itself as American halal food and adopts a stripped-down, Chipotle-style menu of gyros, chicken and falafel over rice as a platter or folded in a wrap. It may be fast food, but it’s savory and fresh; don’t miss the excellent, incendiary smooth hot sauce.

Sacramento has been home to a thriving Muslim community for generations; indeed, it’s home to the oldest mosque on the West Coast, on V Street. Recently, the region has also become America’s top destination for resettled refugees, including a large proportion of Syrian, Iraqi, Iranian and Afghan transplants. Until recently, however, it wasn’t easy to find halal dining options, says Sajad Shakoor, owner of Falafel Corner (3620 N. Freeway Blvd., Sacramento. 916-891-0375).

Shakoor opened Falafel Corner in late 2016 as “an act of service,” he says, hoping to spread the options for halal food and encouraged to do so by his imam. Shakoor’s restaurant, an immediate hit, has expanded to Folsom, Elk Grove, Vacaville and Fremont. The Natomas location, a casual lunch counter in a former Coldstone Creamery location that sat vacant for nearly 10 years, has at its center over the range hood an enormous sign reading, “Halal Way or the Highway.” In the same shopping center, three other businesses offer halal options: a grocery selling meat, Shalimar (an Indian restaurant) and a Thai place that, Shakoor says, started offering a halal chicken dish to meet customer demand.

Shakoor, whose family came to Sacramento from Pakistan in the 1970s, says it’s the kids of immigrants – like him – whose demand has boosted the availability and visibility of halal food. “The younger generation who are born and raised here in America have been the driving force,” says Shakoor. “They wanted halal hamburgers and pizza.” Shakoor obliges them with burgers and other fusion food like a quesadilla with lamb, in addition to excellent, juicy grilled chicken with rice, gyros and fresh from-scratch falafel fried to order.

Shakoor says his customer base is split between diners seeking specifically halal and those just after an inexpensive, fresh, flavorful lunch. The latter are mainly a lunch crowd from nearby offices, while the halal eaters tend to come in for dinner.

From observing this pattern at the Natomas branch, Shakoor chose his newer locations to be close to both office parks and communities with Muslim residents. He’s found, however, that diners who weren’t interested in halal specifically have been lured by the quality and flavors of the cooking. “People come in for falafel or gyro and ask, ‘What are you doing differently?’” he says. “I tell them, ‘Well, it’s halal.’ I’ve had customers tell me they seek out halal now because they can taste a difference.”

Ahmed Adnan, manager of Babylon City Market (1745 Watt Ave., 916-486-7777), which serves only halal meat and has a busy butcher counter, has heard similar things from customers at the 8-year-old market’s bustling deli counter, which offers kebabs, shawarma and fresh-baked breads, including the diamond-shaped Iraqi bread samoon. “I’ve always had halal meat so can’t compare it to other kinds,” Adnan says, “but people try it and say it tastes better.”

The Iraqi-born Adnan came to Sacramento as a refugee from Syria in 2009 and has noticed a growth in halal options over the years since he settled here. “There’s a lot of consumers for it,” he says. “A lot of refugees are coming from Afghanistan and Middle East to Sacramento, and you need that product.”

Adnan says those new residents flock to Babylon City Market, which overflows with Middle Eastern specialties, drinks, spices and sweets. It’s worth your time to browse the aisles, but don’t overlook the bustling hot-food counter with plenty of takeout options – an ideal place to pick up a picnic for a day by the American River; the deli accounts for about half of the store’s business, Adnan says. “The thing that differentiates us from other markets is the bread, the deli and the meat.”

A line forms at the back of the store, where other shoppers have to scooch past to the cold case for yogurt, but it’s worth a little scrunching to get the fresh breads, spicy ground-chicken kebab, and savory yellow rice accompanied with sour pickled vegetables; don’t miss the fresh, herbaceous tabbouleh, either. The majestic lamb shank, tender and savory reposing on its bed of slightly heavy yellow rice, hints at the delights of a bigger option: a half lamb, cooked, for $199.

For Adnan, community – and the kind of big family groups that could enjoy that half lamb together – are a key element of the Middle Eastern dining scene, especially as new refugees connect with friends or relatives who are already here. “People are making connections,” he says. “There’s communities, families, people are getting together – it’s a great thing.” His family, he says, like to dine at Famous Kabob (1290 Fulton Ave., 916-483-1700), one of the best-known and most beloved restaurants along the Fulton corridor.

Not all restaurants in the Fulton area, however, are strictly halal. Shakoor notes that many, including the now-closed Maloof’s, were originally started by Lebanese Christians, who came to Sacramento in the 1980s. “The beauty of Sacramento is that there have always been waves of immigration,” says Shakoor. “Now we’re having a Syrian and Iraqi wave, and you’re seeing the result of that with more halal food.”

Some established places are making a shift to meet market demand, according to Adnan. “Since I came in 2009, a lot of places have upgraded to halal,” he says. “Now the majority in this area are Muslims and are asking for halal meat, so restaurants and markets are switching.”

Other strong halal options in the area include Tanoor Halal (2212 Arden Way, 916-646-6437), where the star is the meat. There may not be a lot of bells and whistles on the plate alongside (hummus is ho-hum, and a tiny salad with a pickle doesn’t offer much relief), but a majestic, tender, cinnamon-scented lamb shank is worth a visit, and the beef kebabs are excellent, as is the savory, golden, gently spiced lentil soup.

Close by, Mediterranean Bakery and Cuisine (1547 Fulton Ave., 916-333-5788) is a great casual sit-down spot with an adjacent market full of cookies, dates, snacks, hot sauces and more. (The market advertises halal meat, but the cafe does not; according to staff, however, all menu items are halal.) Speaking of cookies, the baklava at the restaurant is a standout, the best we tried. Pistachio triangles had the perfect rich flaky, honeyed (but not overwhelmingly saccharine) balance; bird’s nests, made with crunchy-crisp shredded filo, were even better.

The bakery’s big oven turns out samoon with lightning speed, and you can take home a bag of five hot and pillowy for a mere two dollars. Specialty breads like lahmajoon and tart za’atar-sprinkled flatbread sell out for the day fast but are worth stalking. As to the main dishes, they’re fresh and well prepared, with flavorful chicken, crunchy and garlicky falafel and perfectly fluffy yellow rice sprinkled with tangy sumac.

In midtown, the somewhat underappreciated Kasbah (2115 J St., 916-442-4388) is a higher-end lounge-style dining destination that offers halal options – but also cocktails, unusually for a place with Middle Eastern bent. Downtown, Darna Mediterranean Kitchen (925 K Street, 916-447-7500) has a slightly scruffy exterior appearance that belies a sparkling interior adorned with arches and tiles. It’s a great under-the-radar downtown lunch option, especially for the hungry, thanks to a lavish buffet. Flavorful, surprising tomato salads and a rich spicy eggplant stew, plus standout baba ghanoush, make it a good destination for vegetarians.

Expect more such restaurants as the market for and awareness of halal food and bright Middle Eastern flavors continues to grow – a welcome development for Muslim and non-Muslim diners alike. And if Falafel Corner’s Shakoor has anything to do with it, everyone in town will grow to love halal food. He has a special way of enticing customers who are skeptical about or unfamiliar with halal meat: his Badmash Burger (“badmash” means gangster) with beef bacon. A taste of the delicious bacon works every time, he says: “People get hooked on halal from, of all things, bacon.”