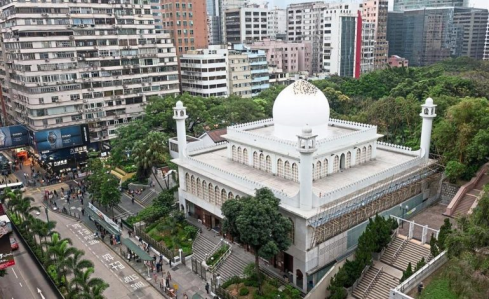 Touching down at the Hong Kong International Airport on a mild, overcast afternoon in late April, I expected my brief stay here to be similarly overcast.

The Hong Kong Tourism Board (HKTB) wanted to show Malaysian, Indonesian, and Singaporean journalists, as well as tour agency representatives, just what this Special Administrative Region of the People’s Republic of China has to offer Muslim holidaymakers.

I did not expect much, because Hong Kong isn’t obliged to make it nice for Muslim tourists, I thought.

Yet I was pleased to find that the territory has potential to be a great place for Muslim travellers.

In all of Hong Kong (that is, Hong Kong Island, Kowloon, and the New Territories), there are a total of 51 restaurants, 13 hotel restaurants and six theme park restaurants that have so far received halal certification by The Incorporated Trustees of the Islamic Community Fund of Hong Kong. You can see the complete list on HKTB’s website (just type “halal” in the search field).

My troupe visited a few of these, the first being Wai Kee, an outlet that serves halal food in the Bowrington Road Cooked Food Centre in Wan Chai district. The food centre is accessible by an elevator tucked into a nook on one side of the building – one floor up and you are there. In this air-conditioned indoor collection of eateries, Wai Kee is easily found – just look for the word “halal” in Arabic script.

Owned by a Muslim, Wai Kee serves roast duck, curry dishes, set dishes with rice and noodles, among others. Visitors here may want to try the roast duck, for which Wai Kee is apparently well-known.

Another good place to eat is the Islamic Centre Canteen, which can be found on the fifth floor of the Masjid Ammar & Osman Ramju Sadick Islamic Centre, not far from the Bowrington Road Cooked Food Centre.

Simply laid-out, this friendly eatery serves a variety of Guangdong-style dishes, including dim sum. If you ever wanted to try halal dim sum, then this is a good place to start. We were pleased with our meal here.

The centre also has two prayer halls on the floors below; one for men, one for women.

If you like cakes, buns, cookies and other such baked goods, visit Chrisly Cafe on the third floor of the Shun Tak Centre on Hong Kong Island.

This cafe isn’t entirely halal: it is a traditional cha chaan teng (“tea restaurant”) with a halal-certified bakery section, entirely separate from the main food kitchen. This is why it is listed as Chrisly Bakery on HKTB’s online list of halal eateries. The owners hope to eventually have the whole restaurant certified halal.

Chrisly Cafe serves pineapple bun, egg tart, “wife cake” and peanut butter biscuit, among others. These goodies are cooked fresh and will only last a few days. I guess they don’t contain a lot of preservatives.

(From left) Have some milk tea with pineapple buns and egg tarts at Chrisly Cafe.

For Moroccan fare, try the Casablanca Restaurant & Cafe located on the sixth floor of the Ashley Centre in Kowloon. The address is easy to spot at night – just look for the light projection at the doorway to the elevator. Think, Bat-signal.

The dining area is well furnished, and features paintings with a decidedly mideastern slant. With the hookah available for one’s indulgence, it almost feels like I’m not in Hong Kong. They serve Mediterranian and Asian food; their menu even includes pastas and pizzas.

The helpings are generous, too. I made the mistake of trying to finish my chicken doner with rice all by myself instead of sharing it with everyone, and found it really difficult. This was an unexpected problem I found in Hong Kong – I was often taken aback by how much I had to consume and as a result, wasted food. Terrible!

On our third night in Hong Kong, my group was scheduled to eat in Jashan Celebrating Indian Cuisine (yes, that’s the name) on the island.

Instead, we ate at Ma’s Restaurant in Kowloon. Whatever the reason for the change in venue, I’m sure glad it happened, because if there is one place you must dine in Hong Kong, then it is Ma’s Restaurant.

Everything I ate there was delicious. I was amazed. What to recommend? How about EVERY­THING?

Okay, if I had to pick one thing, it would be the veal goulash, which is a bun stuffed with beef. That description, or even the way it looks, does not do justice to how it tastes. Just one bite and it is almost … heavenly. And that pretty much describes the other dishes we had.

Every single dish we ate in Mas Restaurant in Kowloon was delicious.

Other than restaurants, you can try Lee Keung Kee North Point Egg Waffles, at King’s Road in North Point. This was recommended by the Michelin Street Food 2017 guide.

If you like theme parks, you may be pleased that Hong Kong Disneyland has two halal-certified restaurants, Tahitian Cafe in Adventure Land and Explorer’s Club in Mystic Point. There’s also an outdoor vending cart called Main Street Market. We ate in Explorer’s Club, which seems like a cross between a high school canteen and a fast food joint, only much nicer.

The other theme park we visited, Ocean Park Hong Kong, operates two halal-certified kiosks: Dive Into A Float at Marine World and Panda Food To Go at the Amazing Asian Animals.

However, beware the kiosk called Malay Foods – it is not halal!

HKTB’s website lists five mosques (four on the Island, one in Kowloon) that serve Hong Kong’s more than 200,000 Muslims (Wikipedia lists a sixth, in Kowloon). We visited three of them.

The Jamia Mosque is the oldest mosque in Hong Kong.

The first was Hong Kong Island’s first, the Jamia Mosque, which we entered via the Central Mid Levels Escalator. Also called Lascar Temple, it was built in 1849 and rebuilt in 1915. We performed our first prayers here.

It is a modestly-sized mosque that is dwarfed by tall buildings on every side. It can fit maybe 400 worshippers (my estimate), with the ablution area in a separate building. The building’s sole minaret sits on top of the entrance arch.

Another mosque is Masjid Ammar of the previously mentioned Masjid Ammar & Osman Ramju Sadick Islamic Centre. As said before, the prayer halls are separated into two floors, one for men, the other for women.

The Masjid Kowloon & Islamic Centre in Kowloon, built in 1896, is a major landmark in Tsim Sha Tsui. From the gate, it was almost as if I was about to enter a stately museum.

You may be surprised to know that the 118-story International Commerce Centre in Kowloon has a prayer room. Located in SKY100, an observation deck on the 100th floor, the prayer room is clean, much like the rest of the observation deck and a little small, but I think adequate. After all, Malaysia has even smaller prayer rooms in certain places – in fact, positively tiny.

Other than mosques and your hotel room, you may have to ask around if the building you happen to find yourself in has a prayer room. It couldn’t hurt. Disneyland has one at the previously mentioned Explorer’s Club (just one, for both men and women), but outside the club there is no obvious indication of its existence. Ocean Park offers prayer rooms, but you must ask Guest Relations via the General Enquiry Hotline at +(852) 3923 2323.

Ocean Terminal, which we also visited, does not seem to have one.

But as we found out, Hong Kong is not without amenities for Muslims. Once you have figured where you can eat and pray, you can enjoy Hong Kong more easily.