Will Debate Over Halal Meat Lead To A Rise In Islamophobia? 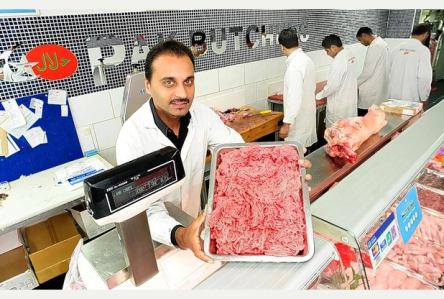 A HALAL butcher has spoken of his fear that the national debate over the slaughter of animals will encourage Islamophobia. Abdul Malik owns Bristol's Pak Butchers, a chain of halal butcher shops supplying the South West with traditionally-slaughtered meat. Abdul Malik, who owns a chain of Halal butcher shops in Bristol.

John Blackwell, president-elect of the British Veterinary Association (BVA), yesterday said that the traditional practice of slitting animals' throats and allowing them to bleed to death for Halal and kosher meat caused unnecessary suffering.

The RSCPA has been calling for Halal and kosher meat animals to be stunned before slaughter for a number of years.

But Mr Malik has defended the practice, saying: "I feel that industry, animal welfare and consumer attention should be focused on the issue of battery farming, the life of animals before entering the food chain, and the fact that we have no control over international imported standards of meat and poultry in this country.

"I feel it is my basic right to have food suitable to my dietary requirements as a Muslim. This debate is around the stunning element of slaughter. The basic requirement according to Islam and sharia compliance is that the animal is not dead at the point of slaughter, so that all the blood is drained from the body as the heart is still beating."

"I would rather have no doubt that the animal has been slaughtered correctly and lawfully and that a product is Halal."

A debate is still ongoing over whether stunning an animal before its throat is slit causes more or less pain that other methods used by non-religious slaughterhouses, which can include electric shocks and drowning.

Mr Blackwell called for a ban on slaughtering animals without stunning them first.

He also said that if this couldn't happen, all meat products in supermarkets should be labelled, so the public are aware of how their meat has been killed.

But Mr Malik said there was a huge demand in Bristol for Halal meat, and a blanket UK ban on the practice would be inappropriate.

He said: "There is scientific evidence of the advantages of this method of slaughter compared to the stunning method.

"Other animal welfare points must be raised before we talk about the practice of Halal and kosher.

"Muslim people deserve to have Halal meat available to them. This debate feels like double standards are being created, and they could fuel religious hatred and Islamophobia."

"There is so much confusion surrounding this issue, and people are quick to jump on the bandwagon."

Mr Blackwell maintained that the discussion was not about religious faith, but prioritising animal welfare.

Helal Wine not certified by HQC/COHS